Paint away your troubles

It is never easy to paint on the sea. It is rarely calm enough and the movement can destroy your painting in a second. There is a little known story that Pablo Picasso was a sometimes cruiser, tried painting at anchor, and that is how cubism began. So even if the great Pablo Picasso had trouble painting on board of the boat how can you?

Painting on the boat – tips and tricks

Well, here are a few bits of advice collected from artists who dabble in sailing or sailors who dabble in painting. You can paint on canvas, even have an easel if you have enough space on your boat. You can paint on canvas, even at anchor, if it is calm enough. Most of the people who paint on their boats use acrylics or watercolors. Possibly this is due to the fumes of turpentine, and the fire hazard involved if you’re making passages. If you live at a marina with trash disposal, no worries at all, just don’t paint in the cabin without enough fresh air. The paints should not be affected by salt air, the bigger problem is mildew so you have to make sure to protect your canvases. Oils take so long to dry so it is maybe better to try acrylic paints if you are in a humid environment.

If you want to paint what you see here are helpful hints for painting a seascape. The biggest difference between painting a landscape and a seascape is the ocean part of the equation. Having a strategy for painting water is vital in creating convincing seascapes. When painting any landscape, the light is probably the defining factor when choosing colors. This is even more important when you’re dealing with large bodies of water. Whatever the light is: sunset, sunrise, mid-morning, cloudy or stormy, it will have a profound effect on ¸the ocean. Water is highly reflective. Whatever is happening in the sky will be reflected on the ocean. Whatever’s happening on the surface of the water, will also determine how much of the sky is reflected. In other words, the smoother the surface of the water, the more likely you are to see more sky reflected. Waves will create little windows which will reduce the amount of sky reflected.

Now to the similarities. These rules apply to landscape paintings as well as ocean landscapes:

It is impossible to talk about painting while sailing without talking about the influence the sea has had since the beginning of time. Marine art or maritime art is a form of figurative art (that is, painting, drawing, printmaking and sculpture) that portrays or draws its main inspiration from the sea. Maritime painting is a genre that depicts ships and the sea – a genre particularly strong from the 17th to 19th centuries. In practice, the term often covers art showing shipping on rivers and estuaries, beach scenes and all art showing boats, without any rigid distinction – for practical reasons subjects that can be drawn or painted from dry land in fact feature strongly in the genre. Strictly speaking “maritime art” should always include some element of human seafaring, whereas “marine art” would also include pure seascapes with no human element, though this distinction may not be observed in practice.

Maritime art, especially marine painting – as a particular genre separate from the landscape – really began with Dutch Golden Age painting in the 17th century, reflecting the importance of overseas trade and naval power to the Dutch Republic, and saw the first career marine artists, who painted little else. In this, as in much else, specialist and traditional marine painting have largely continued Dutch conventions to the present day. With Romantic art, the sea and the coast were reclaimed from the specialists by many landscape painters, and works including no vessels became common for the first time. The most popular artists of marine art are Jan van de Cappelle, Xanthus Russell Smith, Édouard Manet, Théodore Géricault, Claude Monet, J. M. W. Turner and James Abbott McNeill Whistler but there were a lot of artists who were inspired by the sea.

Contemporary art and the sea

There are a lot of contemporary artists who love to paint near or on the sea but there are two who did something completely different. Gemma Rasdall and Vittoria Chierici are artists who use the sea as their muse.

Gemma Rasdall, a self-described bizarre combination of “workaholic, sailing sea gypsy and artist”, is an Australian painter who is living her dream! She decided to combine her love for sailing and painting to develop a practice: painting seascapes on sailcloth. The series of mixed-media paintings (acrylics, soft pastel and charcoal) utilise recycled sailcloth, which the artist has collected and developed a special preparation process for over the years. “I love the texture of the Dacron, especially the wrinkled, weather-worn and patched sails… they stretch beautifully over a canvas frame too as they are extremely strong,” she explains.

Vittoria Chierici is an Italian artist who in early 2012 Chierici prepared a letter both to clarify to herself and explain to others a new project titled “I want to sail away and paint the sea”. The appeal was addressed to friends and collectors and found 85 sponsors each rewarded with a painting, and thus she was able to go on an artistic cruise. On June 20 the artist boarded the Isolda, a Polish merchant ship for a 16 days Atlantic Ocean crossing that went along Newfoundland, up the Saint Lawrence river ending up in Cleveland. The short “Sailing away to paint the sea” was born out of this experience as well as the film “Hands in Blue”, edited by Milanese composer Maurizio Pisati also responsible for the film score. The trip also inspired a brief exhibition held at the Galleria dei Frigoriferi Milanesi, at the end of which sponsors received their painting.

Today there are a lot of sailboats with Fine Art painted directly on their sails so it is not only functional but great to look at. The imagination and passion of both world-class artists and championship sailors, is creating an exhilarating and unprecedented “moving gallery”.

To end with a very interesting and also little known fact Picasso was a part-time boat designer who worked for Beneteau in its early years. That is where twin wheels and rudders came from. 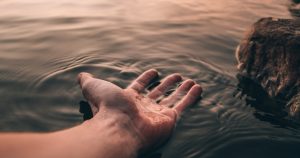